In these uncertain times of Corona, social distancing and working from home, one sees how well today’s office staff are actually equipped for ‘not at the office’ work. Meetings actually run pretty smoothly thanks to software like Teams or Skype, while we can easily work on documents using SharePoint for instance. In any event, we’re inseparable from our smartphones, so we’re constantly connected with the rest of the world. All you need is a laptop, an internet connection, a telephone, and, presto: you’ve got an office at home! Nice developments, but unfortunately such adjustments don’t do the trick for everyone. If you work every day with or on a large structure, then doing your work at home is suddenly a bit more complicated. A dike or a storm surge barrier is difficult to take home with you; so, you’ve quickly got a problem. Wouldn’t it be great if this problem could also be solved?

This is where the concept of the Digital Twin comes in. This digital replica of the real structure allows us to first test work activities on the structure digitally, before actually conducting them in the field. By means of specifically developed software, and carefully placed sensors in the structure, the Digital Twin ensures a connection with all of the manager’s existing systems. Data are visualised and transformed through special processes into decision-supporting information. In this way, not only can work activities be tested before they are conducted in practice, but a Digital Twin also provides managers with an information platform with an alarm capability. Although the system is already commonly employed in numerous industries, it has yet to gain a foothold in the world of hydraulic engineering. This is remarkable, after all a Digital Twin could support, facilitate and improve our work in many areas. With a Digital Twin a manager can not only (digitally) take home the structure that he or she controls, but the system also supports work activities in the field. The manager is able from home to stress-test a structure – such as a storm surge barrier – against changing future storm conditions. How cool is that for a manager?! Thanks to Augmented Reality, it is also possible to easily visualise data on a portable device in the field. The manager can thus always be aware of the structure’s status and of what is happening. The structure is rendered more transparent, which helps in making choices.

I am convinced that the Digital Twin will become the new standard in the hydraulic engineering sector. And I’m not talking about the distant future. If we just look around us at what is happening in other sectors, we are on the eve of a new digital age in hydraulic engineering. I am confident that the Digital Twin is going to help us to the point where, ten years from now, we won’t want to do without it. At Dareius we are also working on the development of a Digital Twin for storm surge barriers. Wonderful, exciting times lie ahead!

If you would like to know more, or if you have an own idea for a Digital Twin, please be sure to contact me.

Storm-surge barriers are a vital element in the Dutch flood defence system: they protect us against high water at times when it is truly necessary. Currently, such circumstances occur sporadically. The Maeslantkering in the port of Rotterdam area is such a storm-surge barrier. Since its commissioning in 1997, it has only been closed on two occasions in response to a storm situation. But despite its limited use, the barrier needs to fulfil safety standards at all times. In order to meet these standards a Risk-based management and maintenance strategy has been implemented to ensure the barrier’s optimal condition. After all, each component of the barrier represents a potential risk (chance of failure) of the storm-surge barrier’s malfunctioning. Essential components are therefore implemented redundantly so the chance of failure is reduced significantly. With these measures we believe to have created a coherent system that guarantees the flood safety of a large part of the Netherlands. To-date, we haven’t spared a penny or effort on this. After all, it is our safety that is at stake – as well as safeguarding the economic continuity in the south-west of the Netherlands, an area that locates one of the world’s biggest ports.

At the same time, we have to ask ourselves, given the challenges of climate change, how much longer this system remains functional and secured. With rising sea levels and increasingly violent storms, the storm-surge barriers need to close more frequently. It is very well possible that within the next ten years the Maeslantkering will not close once every ten years, but once every three years. And within the next twenty years, it might close yearly. For the Eastern Scheldt barrier, also located in the south-west of the Netherlands, it could very well be that during the storm season the barrier closes once a month. This leads to significant consequences for the barriers’ maintenance regime. The conduct of maintenance under risk-based management, as it is done today, will therefore take on added importance. This means higher costs and, moreover, the ecological impact on the local intertidal zone will be considerable because of the alternating salt-salt regime. And we haven’t yet pointed to the economic consequences of closing a storm-surge barrier. Just think of the economic damage caused by having to temporarily keep ships from entering the port of Rotterdam because the Maeslantkering is closed.

If the trend continues, then we’ll need to ask ourselves how long, and under what external conditions, today’s storm-surge barriers will continue providing a sufficient safety guarantee. This of course depends a lot on the climate scenario. The Delta Programme, the strategic framework within which this kind of infrastructure currently functions, assumes a maximum rise of one meter in sea levels this century. But scientists are far from comfortable with this figure. Early this year, an article in the Dutch news magazine, Vrij Nederland, caused quite a stir. Leading scientists argued that the extrapolation of current climate trends will present the Netherlands with a number of existential questions and possible courses of action. These included a couple of business-as-usual and two other pretty extreme scenarios. The latter included one in which the Netherlands would organise its defences further to the west, with islands in the sea, and one in which the Netherlands would withdraw to the, currently still, higher situated eastern half of the country. But in all of these scenarios the most crucial question today is: How can we, whatever the dynamic scenario, continue to successfully make use of our infrastructure? And which no-regret vision will we follow in adjusting the existing infrastructure and in designing a new one. Because, however extreme the scenario, in all cases the road towards it is an incremental one – and, of course, one paved with an increasing risk of negligent action. In this regard, one of the challenges over the next decades will be to establish in detail the usability and adjustability of the current and future water safety infrastructure. This will also involve building associated digital systems, in which the traceability of the design, and the management and maintenance, are organised in a comprehensive and optimal manner.

Luc Ponsioen is a flood protection specialist. Monthly he invites us to accompany him in his advisory work and, as a blogger, shares his experiences with visitors to the Dareius website.

I am a civil engineer and graduated from Delft University of Technology in the Netherlands, a country whose inhabitants have ‘living with water’ in their genes. A country where, since time immemorial, property and land have been well protected against flooding. I have worked on this for some time as an engineer. The specialty is called flood protection. And the design of innovative and effective infrastructure is part of it. A rewarding occupation, given the prospects of steadily rising sea levels.

How do we keep things safe in our delta?

Innovative river dikes, secondary channels and smart coastal protection naturally all play a prominent role. Moreover, the action perspective for extreme situations is also sometimes re-visited.
In this connection, I recently had to think back on the research work I did in Vietnam a few years ago. Every year the waters from the mountains, in combination with high waters, cause flooding in the country’s coastal areas. The floods can last for weeks and people are forced to leave their homes. Annoying and technically soluble, we thought – on paper. We had yet to set foot in the area. A technically perfect solution bringing with it a reduced flow and a small risk of flooding. But also a pricey solution. Once in the area, we realised how far off the mark we were. To be sure, the annual flooding made things difficult, but it wasn’t really a problem. ‘The water comes up to here every year,’ one resident told me, stretching out his arm. ‘I immediately understand that I have to get out of there. And that’s why I hang all my valuables above this level.’ He patiently explained to me that every year, when things reach that point, he leaves in time and goes and stays with his brother in the mountains. He also said that he looks forward to the very fertile soil the river will deposit on his land while he’s away. But he is annoyed by not having heating or rubbish collection. ‘The high waters only last a couple of weeks, but I’m cold for half a year!’

It immediately occurred to me that we really have to look for the ‘question behind the question’ more often. That flood protection has a technical as well as a social side to it. That we have to learn to live with water. And that this involves more than coming up with innovative designs, however beautiful and challenging. This insight has helped me during the course of my work. Vietnam: an experience I still cherish.

For more information about Water Safety, please contact us at: 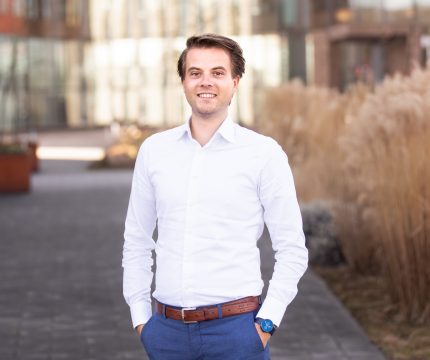